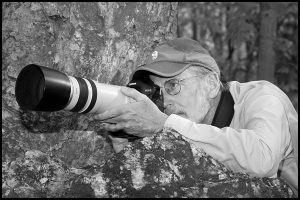 When I was young our family’s camera was only used for special occasions.  I was fascinated by the camera for two reasons; it was used to record special moments and more importantly to a five year old, the flashbulb made a loud popping sound and then sizzled as it cooled.  I would beg to be allowed to take pictures but since film was expensive I was rarely allowed to do so.

I was eight years old when I first saw an image I wanted to make.  I went outside after an ice storm and there was a tree just outside the door covered with ice.  I stood under the tree and looked up into the glistening branches and thought – I want to make this image!  It was both the beauty of the scene and the joy I felt that I wanted to capture.

I received my first camera when I was ten years old and began a lifetime of making images.   My desire to capture not only what I am seeing but also what I am feeling began when I looked up into that ice covered tree.

In 2004 a gallery contacted me to ask if I would consider showing my photographs in their gallery.  I had dreamed of selling my images so I thoroughly embraced this opportunity.   I participate in solo and group shows, developed and taught a six-week photography workshop for the Art Association of Harrisburg, and approached additional galleries who began to carry my work.

My job as Vice President of Senior Living Services for CompleteHealthCare Resources of Dresher Pennsylvania involved a lot of travel so left little time for photography.  I loved my job and the owners of the company were fantastic but I really wanted to try making photography my fulltime business.

After a lot of thought and soul-searching my wife and I decided to move from Pennsylvania to northeast Tennessee.  This region is filled with mile-high mountains and beautiful valleys and we thought it would be the best location to chase this dream.

After the move I participated in several group shows followed by a series of solo exhibitions including Highland Visions (2010), An Opportunity for a Dream (2011), in conjunction with the release of my book The Meaning in Treesan exhibition at the William King Museum (2012) and Exploring the Roan (2013) at the Fine Art Gallery of the Johnson City TN Arts Council.

In 2013 I developed a new one-day photography workshop titled Visual Storytelling and was the featured speaker at the August 2013 Virginia Highlands Festival with my talk titled The Fine Art of Photography.  I also presented this talk in November 2013 at the Women’s Basketball Hall of Fame in conjunction with Knoxville’s Arts and Culture Alliance.  In the spring of 2014 I presented The History of Women in Photography – the first 100 years at ETSU Johnson City TN and in the fall at ETSU Kingsport TN The Camera, Technology and Art.

My latest book, Current, essays on the passing of time in the woods was published in October 2013 by Shanti Arts Publishing.  Fifty-five of my images illustrate the wonderful essays of Robert McGowan.

My photography is now sold in select galleries in Arizona, North Carolina, Pennsylvania, Tennessee and Virginia. 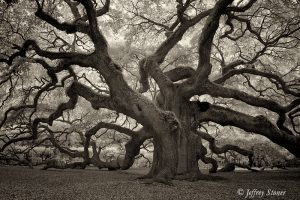 The Angel Oak stands on John’s Island near Charleston SC. This Live Oak is over 1400 years old and is the oldest living thing east of the Rocky Mountains.

Smoky Mountain Art Gallery has an extensive collection of artists, photographers, sculptures and carvers currently being featured on display and for purchase. Find out more about our artists and familiarize yourself with some of Gatlinburg's best handcrafted one-of-a-kind artwork and artists!

Ready for a Vacation?

Our friendly staff and rental accomidations will set the stage for an unforgettable family vacation.